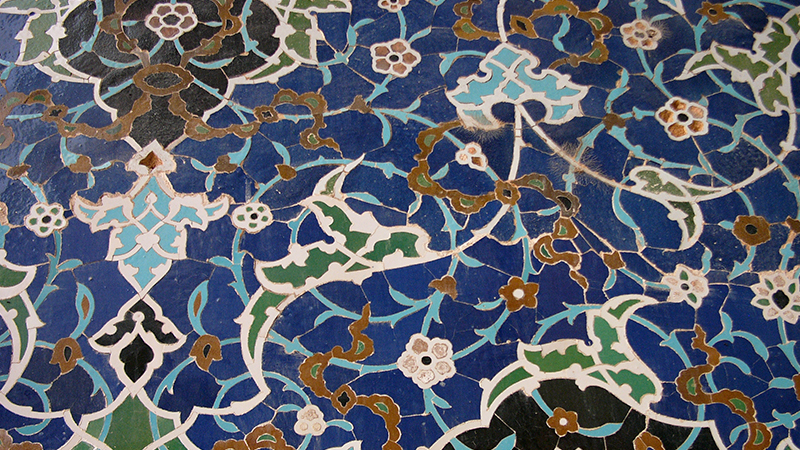 Lecture by Dr. Laura Marks at the Aga Khan Museum

It is always a delight to race up the Don Valley Parkway for a visit to the Aga Khan Museum.  Today Dr. Laura U. Marks is in town, from Simon Fraser University, to deliver a lecture developing some aspects of her 2010 book Enfoldment and Infinity: An Islamic Genealogy of New Media Art.

The lecture is well attended and the Aga Khan people are bringing in more chairs.

Dr. Laura Marks invites us to consider aniconism in Islam.  She talks about the fact that Islam restricts the imitation of God’s creations or representations of the Divine.  She states that Islam determines that God’s actions in the universe should be understood rationally and clearly, without the ambiguity of representation.  Incidentally to these strictures, aniconism creates a rich environment for abstraction.

The necessity for abstraction, the infinitely large and the infinitely small, the properties of geometry i.e. the way it can be multiplied, rotated and mirrored, are some of the connections Dr. Laura Marks makes from historic Islamic art to digital media.  She sees the current digital landscape as directly emerging from this expression and talks about the connections between Islamic art, algorithms, atomism, pixels, performative geometry and the idea that the universe is created out of nothing, and, that it is rich, complex, interconnected and finite.

(What is the definition of an algorithm?  It’s a set of rules that precisely defines a sequence of operations.  Also it has to eventually stop.  It can’t go on forever.)  Algorithms are all the same whether they depict the stock market gyrations, govern Google searches or create digital art.  And the idea of algorithms is ancient.

Above is an animation of a simple algorithm.  It sorts some random values.  See Wikipedia to read about this particular algorithm: the high level language description of the set of rules and the related code.

In talking about these very old ideas Dr. Laura Marks gives us a glimpse of Baghdad in the 8th century.  It was apparently a hotbed of intellectual, scientific, creative and mathematical pursuits.  I’m going to have to read her book to find out more about the invention of algebra, the measurement of planes and spherical figures and the fact that Fibonacci studied mathematics in Libya in the 12th century.

At that time an individual may have carried a talisman that represented their personal handle on the infinite.  Dr. Laura Marks suggests a USB device or, for example, a smartphone can be seen as a modern talisman, containing a generative algorithm creating social interaction among users, and, a gateway to infinity.

Google, Facebook, Netflix and Instagram were called out as the dark side of algorithmic media!  Good point Dr. Laura Marks!  She says they function like the curses that were woven into certain carpets in the ancient world.  These are the cruel algorithms, designed to control, harvest knowledge and conduct surveillance.   Wherever possible, she avoids the manifestations of those corporate entities.

I particularly like her remarks on the “absolute mystery of the infinite” and the way tile patterning in mosques were designed to create “dazzlement and wonder.”

Interior of the Great Mosque of Cordoba, Spain, 8th-10th centuries

Many listeners in the audience look a little bewildered as Dr. Laura Marks talks about certain Islamic art functioning like a User Interface to God.  And her discussion of the pixel experience of time being similar to that of a whirling dervish –  intensive and non-linear, as opposed linear chronological time –  is a little rushed and somewhat baffling.  However, her diligent scholarship, refreshing enthusiasm and poetically nuanced presentation create an exciting atmosphere of  possibility.

What is the digital art the speaker references?  She does not have a lot of time left to discuss it.  The name Hasan Elabi was mentioned! His piece Tracking Transience is so cold and eerie.

Below is a still from Hasan Elabi’s piece which was begun subsequent to a brush with the FBI.  He documents every aspect of his life and provides all the data for public consumption. 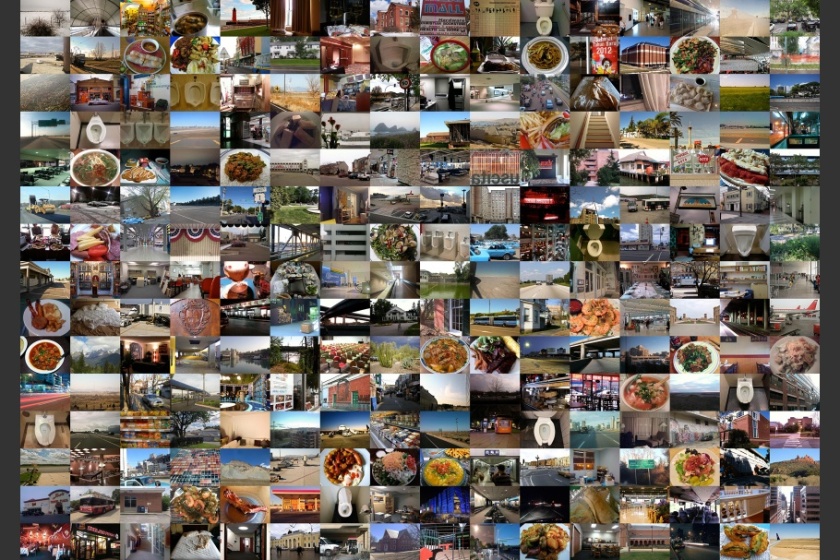 I suppose this is not the future.  It is the now.