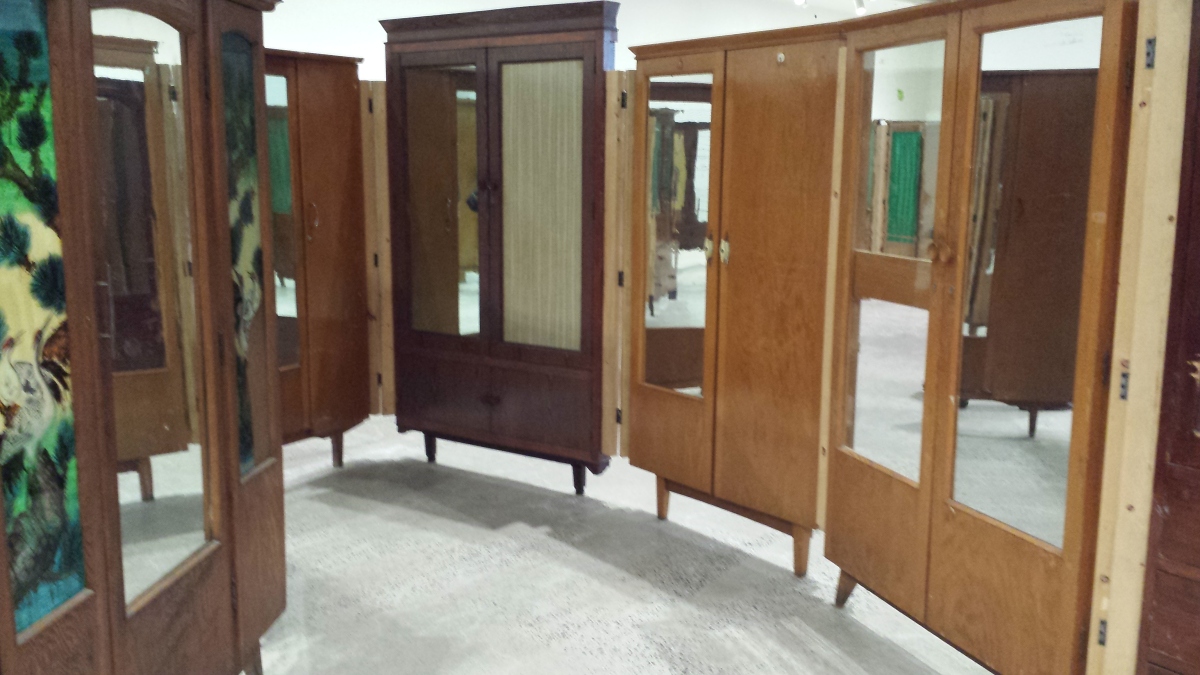 Wisdom of the Poor: Communal Courtyard is the name of the installation by Song Dong at the Art Gallery of Ontario.  The piece has the strange effect of slowing down time and creating a consuming sense of melancholy.  The viewer steps out of the moment and into a maze, composed of antique wardrobes, and, concurrently, into a bygone era. 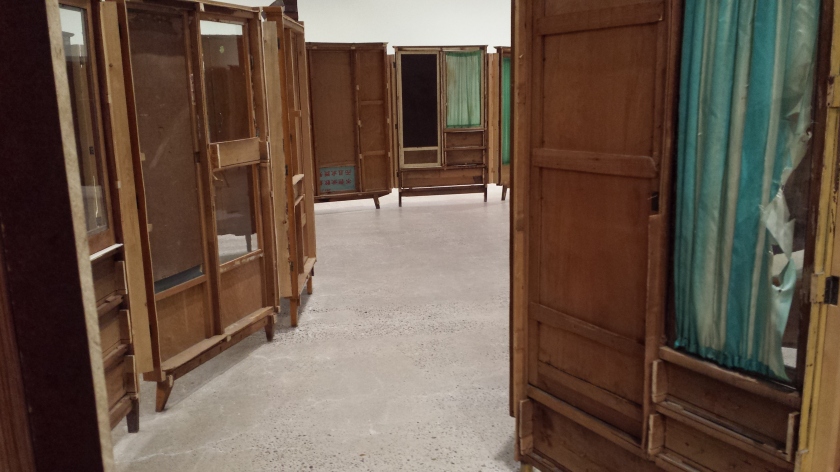 The wardrobes have been dismantled and roughly knocked together to create twisting, labyrinthine passageways.  Bits of fabric, modest curtains, broken locks, faded posters and other sentimental items cling to the gutted furniture and add to the sense of forlorn domestic ruin.

The art piece feels funereal, and there is the lingering presence of ghosts.  Glimpses through openings may reveal another viewer wandering hesitantly, an abandoned bicycle or perhaps a rising tower (wait, its the AGO’s  Sol Lewitt sculpture and elsewhere is the AGO’s Warhol portrait of Karen Kain.)

China is famously changing at a breakneck pace despite an increasing public outcry against the demolition of historic neighbourhoods and a gathering preservationist movement.  Song Dong taps into a powerful emotional yearning for an idyllic past that is felt apparently all over the world. The object of the loving backward gaze could be the narrow, crowded streets of bygone China or …… Mayberry.   In North America this imagery can be baldly manipulative romanticism, covering for a suspect agenda, but what it is in China I do not know.

Admittedly there are some very appealing aspects to the decades past.  For example, long before the rise of Twitter and ISIS (forever linked in my mind) anyone could smoke and drink with abandon, even on airplanes.  But is it my actual memories that view these activities fondly or is it the “Mad Men” portrayal of them that I like?

Meanwhile the unrestrained development in China has not only resulted in the spectacular buildings we see in the media but some weirdly manufactured nostalgia, for example Thames Town, built to look like a charming Tudor town in the English countryside. 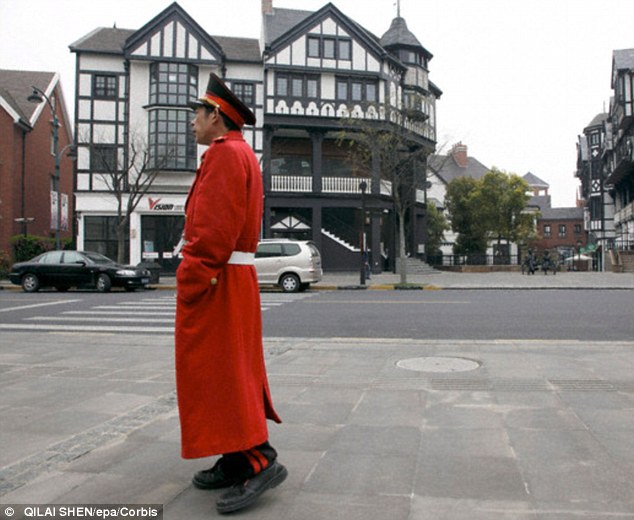 All over North America laundromat seating is the same.  I may have known this as a fact before I saw the show of photographs by Lori Nix at Bau-Xi Photo, but to be honest I never really thought about it much. In Lori Nix’s photo of a post-apocalyptic laundromat (shown below) under dreadful fluorescent light, the seats are identical to those at the “Coin Wash” in the vicinity of Dundas and Keele.  In fact everything is exactly right, except of course the obvious…

Laundromat at Night by Lori Nix

What I liked about looking at these photographs was noticing the detail and how exacting and precise it is.  Lori Nix builds miniatures of scenes she comes across in her daily life and then she photographs them. (To learn how she does this click on the link.)

Lori Nix does not replicate reality.  In all her photographs something is off, really off.  Something has occurred.  Things will never be the same.

What’s going on in Fountain, the art work shown above?  A spectacular public space has been vandalized and then abandoned entirely.  The bronze sculptures have deteriorated, maybe because of chemicals in the atmosphere, such as chlorine, sulfur, nitrogen oxides or maybe just rain. Vines have overtake graffiti and then all (hubris) is silenced by cold and ice. 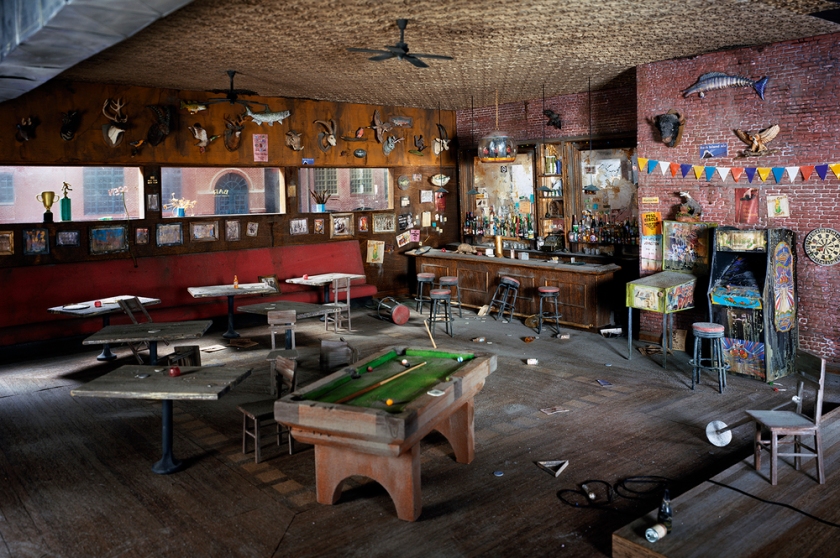 Could this be a bar in rural Ontario on any Sunday morning?  It does look very familiar … except there is no hockey memorabilia.

Despite visions of catastrophe Lori Nix’s art work transmits a sense of enthusiasm for the places she creates.  With meticulous patience she commits these mundane arenas of everyday life to a suspended state of timelessness.

Because of a trip west and the general nuttiness around this time of year I nearly missed seeing a show of paintings by Montreal artist John Player.  Pierre-Francois Ouellette Art Contemporain is just a few blocks west of St. Lawrence Market, which had a raucous atmosphere on this sunny Saturday afternoon before Christmas, and I was able to slip in to see the show on the last day.

At Art Toronto (Toronto International Art Fair) I saw a couple of John Player’s art works. They stood out as not only visually startling but also loaded with frank, serious content.  I was looking forward to coming across more of these paintings. 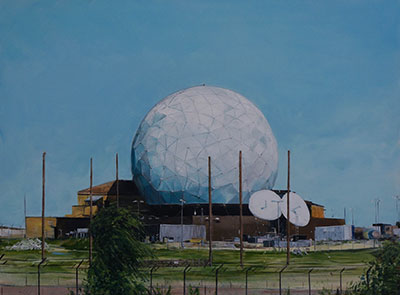 This artist has tapped into something entirely current, and that is the culture of surveillance. It’s a fact of life now that surveillance data is captured, stored, analyzed and traded. We all carry tracking devices (cell phones) with us. We identify all our friends and even acquaintances (Facebook) and offer up all there is to know about our habits, thoughts, opinions in texts, Instagram, Snapchats and email.  Its accepted that while working, shopping, driving or just walking around the city we are all in somebody’s crosshairs.  For the most part, we accept it all as an annoying requirement, like security screening at the airport. 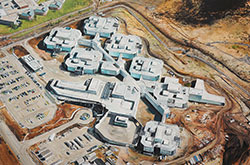 John Player’s paintings make us consider the upshot of this obsessive documentation.  His paintings explore fear and its manifestation as a powerful and cold bureaucracy in which listening devices are linked with incarceration structures and drone excursions. 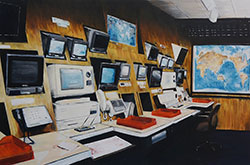 I recently saw Citizen Four by Laura Poitras and the paintings inspire the same kind of spine tingling unease as the movie.  Whereas the film is shocking in its focus on the few pivotal days in which Edward Snowden “came out” and then fled, the paintings suggest something equally dark but more stable and entrenched; a sprawling, well funded set of infrastructures with their own expotentially expanding agendas.

Frequently the mysterious structures, often in desert locales, reference architectural drawings in their replication of space and mass.  The palette is often very subtle, as if the objects are sun-bleached and the viewer has caught the image from a distance, hastily and warily, like the scene of catastrophe or menace.  Some of the interiors have a subterranean, over-lit feeling, as if there is no off switch for the flourescents.  The installations appear deserted yet infused with paranoia and anxiety.  Who exactly is the viewer?  Is John Player trying to turn the tables on the surveillance establishment and watching the watchers?

John Player’s paintings also have a rich sensuality.  The painting above, titled Tactical System, depicts some unknowable, militaristic hijinx from the night sky and the ominous view nearly disolves into just paint and colour and shape and light with appealing success.

Meanwhile, although Mr. Obama has assured Americans that the NSA is no longer listening in on their phone conversations (internet data continues to be collected even for US citizens) Canadians and the rest of the world might be interested to know we are still under full monitor.  According to The Guardian that means all phone communication and includes: “a log of every communicative act that you make in cyberspace – where you went; who you emailed or texted; who emailed or texted you; the URL of every website you visited; a list of every web search you’ve ever made; and so on.”  It’s sobering to think about all that scrutiny.  Makes me want to detach from my gadgets and start writing letters again… in disappearing ink.