How about those grimy ice hillocks that are lining the streets of Toronto?

I have to keep reminding myself that civilization is not breaking down.  It’s just winter.

The Koffler Gallery, located in Artscape Youngplace, is the site of an exhibition by Kriistina Lahde titled ULTRA-PARALLEL.

I arrived to see the show in a completely winterized getup. The young woman at the desk immediately sprang into action and rushed up to meet me as I entered the gallery space. It took me a few minutes to figure out why this woman – charming and erudite – was so intent on guiding me around the show. The fact is that much of the work is delicately balanced and perishable. It could be easily destroyed by an unruly toddler ….or a viewer with fogged up dark glasses and a puffer coat. She didn’t want me to accidently wreck something.

It’s always so satisfying to see an art piece right in the middle of a gallery space. This show has a spectacular sculpture front and center. As light and airy as a dandelion puff ball the work is also structurally engrossing and culturally loaded.

From a straight line to a curve by Kriistina Lahde 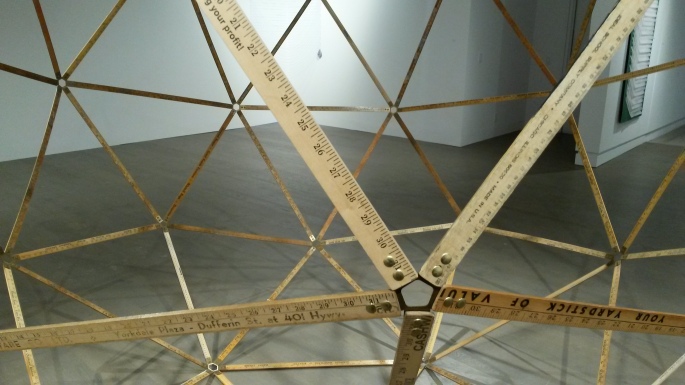 Geodesic domes must have been around forever but for me they are associated with Buckminster Fuller. He discovered that triangles arranged into a sphere create structures of incomparable strength. He tried to market geodesic domes as dwellings but they did not catch on.  (Civilization is not breaking down!)

The sculpture is made of vintage yardsticks.  Each has a glowing patina and is emblazoned with the name of a long gone hardware store or house paint purveyor.  Even the name “yardstick” is an anachronism and the use of these appealing objects, once so common as to be nearly invisible, softens the piece and adds a melancholy dimension.

Yardsticks are the raw material for another sculpture in the exhibition.  This one, depicted below, glows in a delicious curve as the wooden sticks are arrayed according to hue and balanced in a swoop. 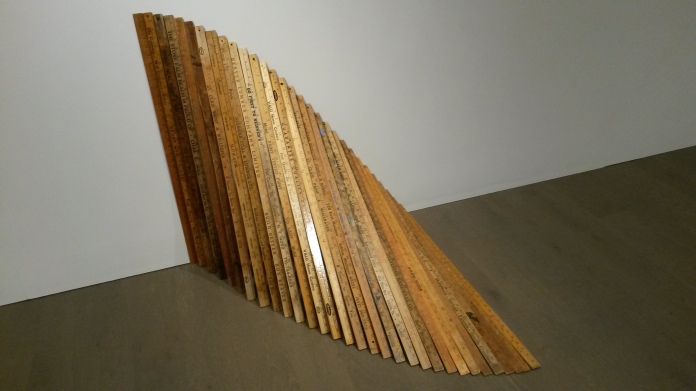 In fact, most of the pieces in the show are created from measuring devices: A chalk reel, surveyors tape measure, vellum, sewer’s measuring tape, and the yardsticks.  Routine, utilitarian, mundane could all be used to describe these objects.  Kriistina Ladhe uses them with grace and wit not so much to transform them as to allow their brilliant versatility and simplicity to be evident in a new context. 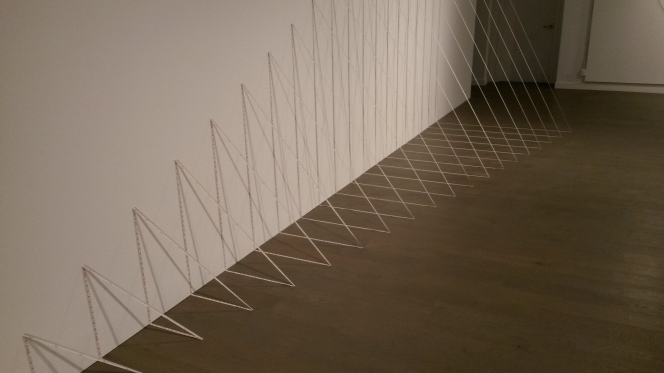 Detail of String and a Box by Kriistina Lahde

Detail of Tool for Making by Kriistina Lahde

Greater than, less than by Kriistina Lahde

Near the entrance to the exhibition is a mysterious circular piece of steel.  It is a depiction of a meter.   The phrase “Meter: one forty millionth of the circumference of the Earth” is etched along the bottom rim of the object.  This piece has all the marks of serious tool but it is delightfully useless.

The concept of the meter goes back to the 18th century.  After the French Revolution the French Academy of Science selected this as the standard measurement unit in the new Republic.  It was believed to be one ten-millionth of the length of the meridian through Paris from pole to the equator.  Actually they were a bit off, which is explained in an essay accompanying the exhibition.  Currently, somewhere in Geneva, the meter is defined as “the distance light travels, in a vacuum, in 1/299,792,458 seconds with time measured by a cesium-133 atomic clock which emits pulses of radiation at very rapid, regular intervals.”  Progress, not perfection.