Carol Wainio at Paul Petro Contemporary Art
The paintings by Carol Wainio on display at Paul Petro Contemporary Art quickly drew me into their dense, tangled layers of imagery.
These paintings are so visually deep.  A dark, gnarly, ancient-looking forest landscape is the middle ground.  Far in the distance are winsome pastel vistas.  Strangely patterned birds, maybe pheasants, charge about the forest floor, heading for clearings and stone pathways through the old growth.  Numerous disparate objects, creatures, little people, symbols of all types and sometimes words are found embedded in the welter of images.  In the foreground, bold, simple line drawings and fat polka dots create a closer surface, as though we are looking through glass into another world. 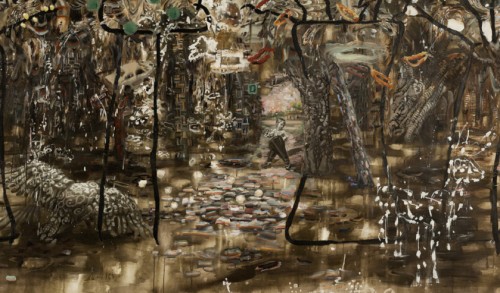 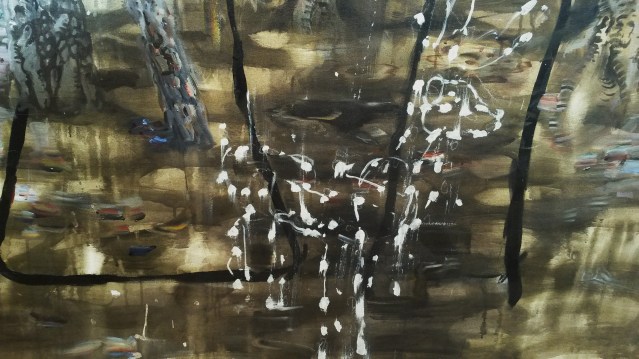 Accompanying the show, titled Dropped from the Calendar, is a long text written by Carol Wainio in which she suggests the nature of modern life has resulted in certain losses such as the creative luxury of boredom, certain notions of enchantment, reliable shared memories and rhythms of the seasons.  The phrase “dropped from the calendar” refers to the pages of traditional holiday calendars which were once reserved for personal recollections.  Are these blank pages no longer necessary since recollections are manufactured and provided for us now?

Frequently the outline of a transparent fawn, like the familiar twinkly Christmas lawn ornament, turns up in the paintings.  Could be that Carol Wainio is connoting our feeble and sentimental link with the natural world through this image. 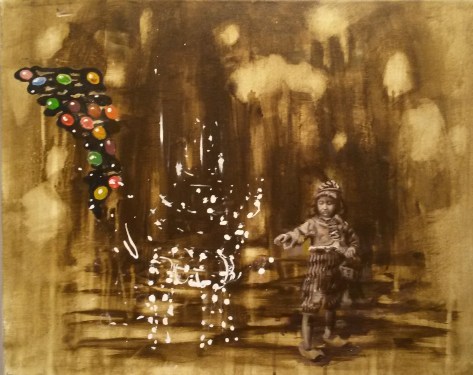 Renderings of children, definitely from another period in history, also recur in the paintings.  For some reason I thought of the Hummel figurines my mother-in-law in New Jersey used to collect.  They seemed beyond kitsch — the height of manufactured nostalgia –  to me.  Maybe that is what Carol Wainio is getting at, i.e. that our private nostalgia has been hijacked and sold back to us.

It is a pleasure to look at these paintings which are both visually and metaphorically deep and to spend some time speculating on the connections and references within them.

In the accompanying text Carol Wainio quotes Walter Benjamin’s talking about fairy tales in the modern age: “This is how today it is becoming unraveled at all its ends after being woven thousands of years ago in the ambience of the oldest forms of craftsmanship.’   I was thinking about these ancient tales and how they helped people in perilous times when I came across an announcement about the release of some long lost Grimms’ Fairy Tales.  One of the stories is summarized below:

“Once there was a father who was slaughtering a pig in the yard,  His two sons saw him do this, and they decided to play slaughtering. One of the brothers became the pig, and the other became the slaughterer and he slit the throat of the younger brother. In the meantime, the mother was watching upstairs from a window and saw what had happened. She ran downstairs and took the knife out of the boys throat and, out of fury, she stabbed the older boy in the heart. And then she realized the baby was upstairs, and in the meantime the baby had died and drowned in the tub. She was so remorseful she committed suicide. The father, he was so dismayed that after two years he wasted away.”