The Aga Khan has bestowed his mythic glamour — which normally involves race horses, yachts, French chateaux and movie stars — onto the modest Toronto neighbourhood known as Flemingdon Park. There lies the site of the brand new Aga Khan Museum, which I glimpsed from the Eglington Avenue East exit of the Don Valley Parkway. On approach, through various off ramps and merges, the structure rises up, like some giant dazzling white envelope, or packing crate, elegantly unfolding in the late November chill. 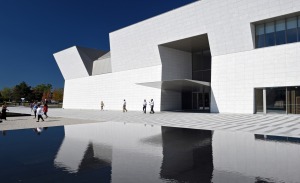 Entrance of the Aga Khan Museum

Designed by Fumihiko Maki, the Aga Khan Museum is like a sundial in that light moves around a central open courtyard. Throughout the day the suns rays are cast through elaborately etched glass to create an ever changing panorama in the spacious multi storey structure. 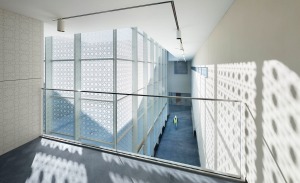 Tracing the spread of the Islamic faith across the world, the Museum displays numerous exquisite objects from past centuries.

The Museum curators have used the contemporary world map to locate the physical origin of the collection.  For example, Iraq was created only in 1958 but the watercolor shown below is identified as 13th century Iraqi. 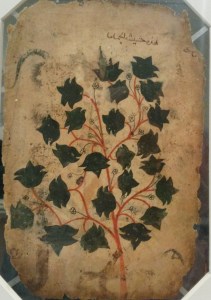 Where does this beautiful artifact fit in?

According to Wikipedia, the area now called Iraq has been home to various cultures since 6th century BC and was “center of the Akkadian, Sumerian, Assyrian, and Babylonian empires. It was also part of the Median, Achaemenid, Hellenistic, Parthian, Sassanid, Roman, Rashidun, Umayyad, Abbasid, Mongol, Safavid, Afsharid, and Ottoman empires, and under British control as a League of Nations mandate.” 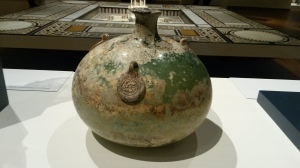 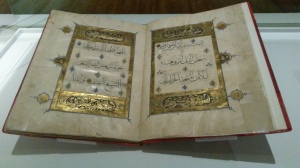 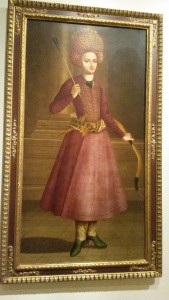 This is a painting from Iraq in the 1800, when the East began to encounter the West.

The ground floor of the museum is devoted to display of historical objects and showcasing events and performances, many of which take place in a spectacular domed auditorium.

Take the staircase to the second floor to see the current show of contemporary art from Pakistan. 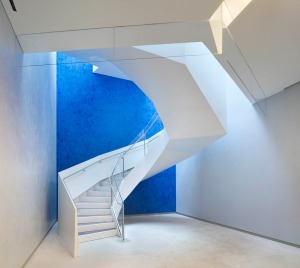 The exhibition of young Pakistani artists, titled The Garden of Ideas, immediately looks like present day art from anywhere and could have easily been covered in one of the links from Artsy that regularly floods my inbox.  But looking a little closer this show is curated to link to the Islamic identify of the artists, using embroidery, textile and carpets, gold leaf miniatures, tiles and paving stones to create fresh interpretations with traditional materials. 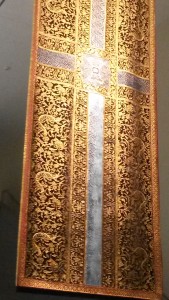 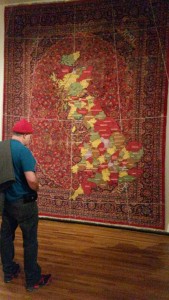 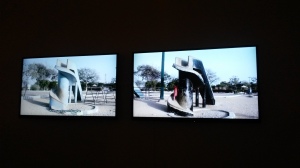 The Garden of Love – Mani Abidi 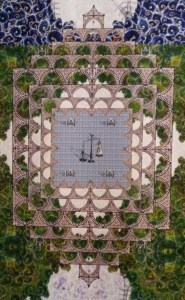 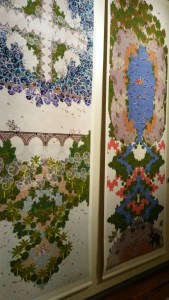 Details of works by Atif Khan 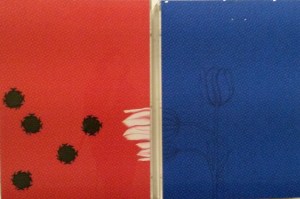 detail of painting by Aisha Khalid

The whole experience at the Aga Khan Museum was relaxing, enlightening, refreshing.  It was like a trip to a distant spa.

On the way out we skipped the gift shop and had a beautiful view of the Ismaili Centre which sits across from the Museum separated by some celebrated gardens designed by Vladimir Djurovic, which I will look forward to seeing in April. 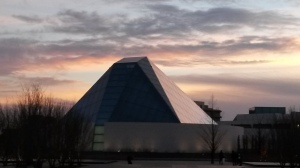 It would have been a perfect day except for a traffic jam of historic proportion on the DVP, which meant more than two hours later we were still in the Flemingdon Park neighborhood, trying to crawl back to Toronto. 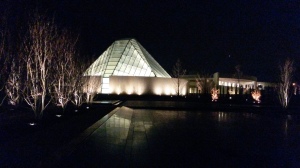