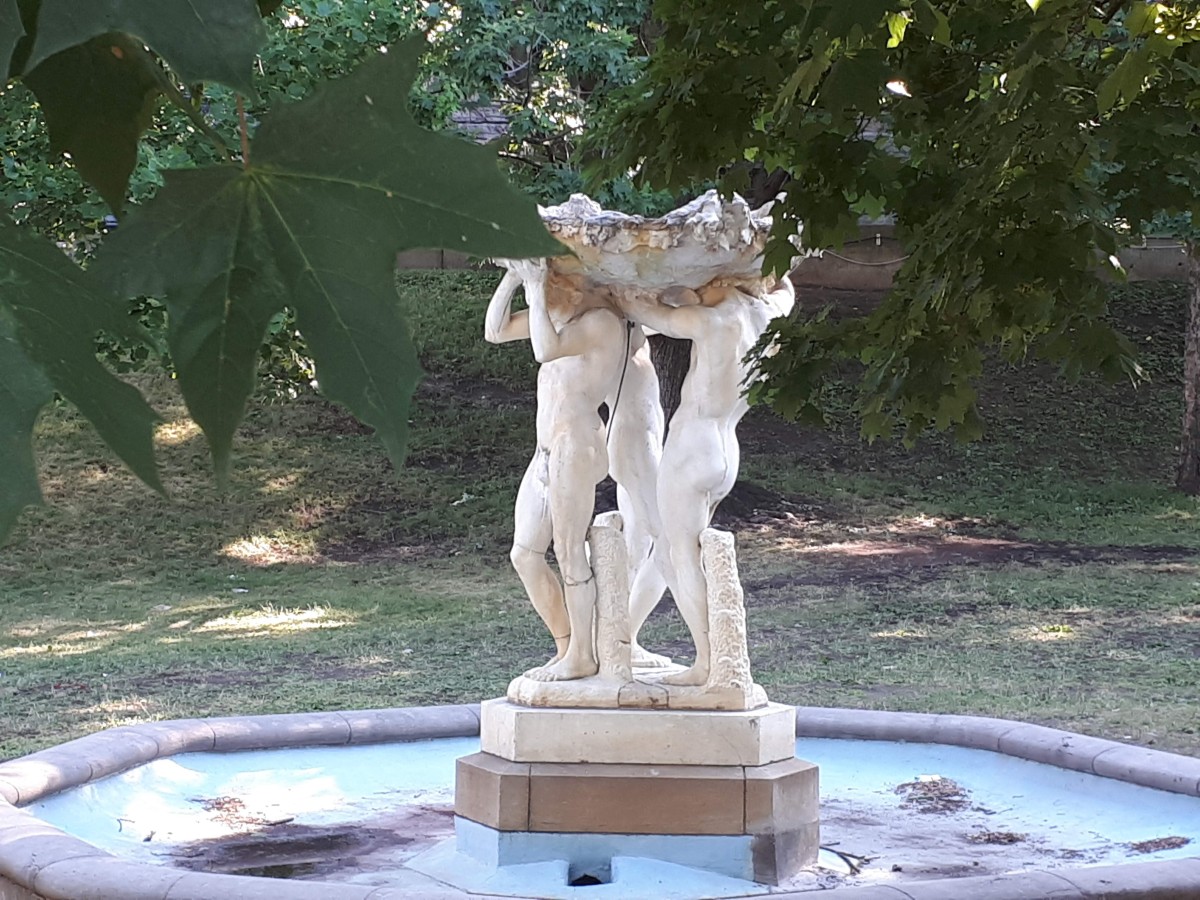 Life in graceful Montreal moves at a sauntering pace.  The sidewalks feel broad and unhurried.  There is always a table to be had, even at peak time.  The movie is never sold out.  In the hot, white glare of an afternoon in mid-July downtown Montreal feels nearly deserted and the saunter slows to a languid drift.

I am drawn to the churches: hushed, dark, cool, grandly capacious and filled with exquisite objects.  Mary, Queen of the World Cathedral is my favourite.

Narthex of “Mary, Queen of the World Cathedral” in Montreal

The role of the non-cloistered female orders and their leaders, particularly Saint Marguerite Bourgeoys, are exalted in this edifice.  There are a number of depictions of her, always looking beatific, in the Cathedral.

Saint Marguerite Bourgeoys teaching her indigenous pupils in 1694 on ground belonging to the Sulpicians. Work by Georges Delfosse. 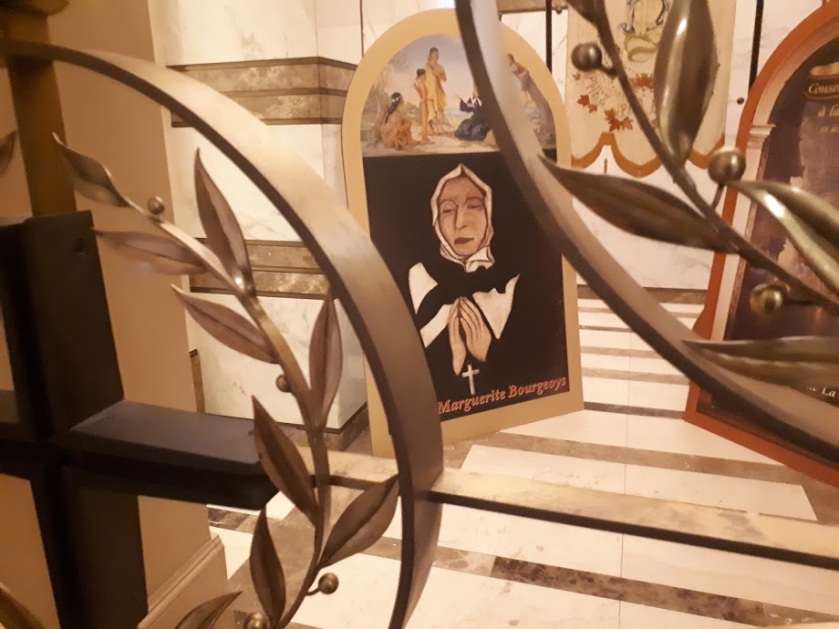 I was thinking way too much about faith, charity, devotion and, becoming hypnotized by the candles burning in the dim light.  It was time to buy a Mother Theresa medal and move on to the Museum.

The Museum of Contemporary Art

Richard Ibghy and Marilou Lemmons piece titled The Prophets creates the absorbing core to a group exhibition of the same name.  Spread about on high tables, Ibghy and Lemmons’ delicate, petite sculptures relate in a playful, irreverent way to the conceptual and/or formalist artworks, by renowned artists, on the surrounding walls.

Detail of “The Prophets” by Richard Ibghy and Marilou Lemmons

Detail of “The Prophets” by Richard Ibghy and Marilou Lemmons

The succinct transmission of information in charts, graphs and process maps is slightly subverted here.  Drole captions hint at meaning but these are gestural data depictions, not literal.  They use the familiar forms of  the financial pages but have more in common with Russian Constructivist graphics.  Their connection to, for example, the Sol Lewitt prints in the same room is definite but updated.  Whereas the early conceptual artists, like Sol Lewitt, were obliged to create text instructions accompanying their visual production — the formal texts sounding rather like logic statements or algorithms — Richard Ibghy and Marilou Lemmons experience no such constraints.  They just go for it.

It seems to be a very popular show.  Visitors linger and are compelled to take numerous photographs, intently focused, peering into their smart phones and leaning over the tables of sculptures they wile away the summer afternoon.

Museum goer photographing art work by Richard Ibghy and Marilou Lemmons, while standing in front of a painting by Jack Bush

Also at the Museum of Contemporary Art is a massive exhibition of the work of Rafael Lozano-Hemmer.  The show is called Unstable Presence.

Rafael Lozano-Hemmer is interested in human interaction with systems, benign and otherwise.  Sometimes the work manifests as big, flashy public-type display, something you might see at Nuit Blanche.  For example: A sensor detects a human heartbeat and ignites a dazzling display of glittering bulbs in the museum rotunda.  I guess the “unstable” is the human participant. 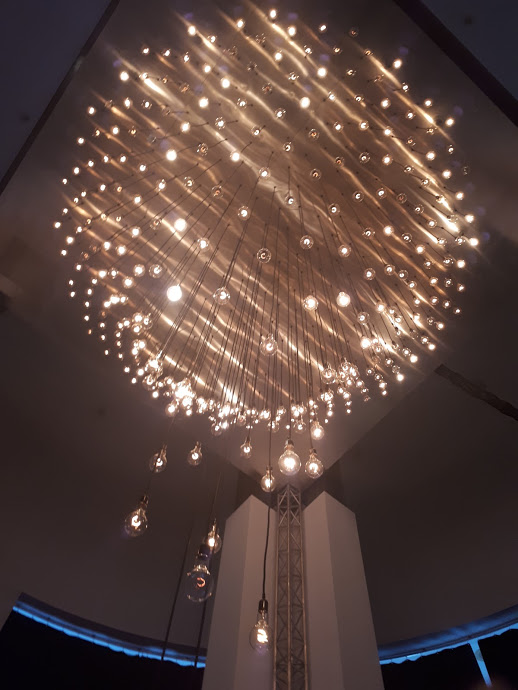 Other works — for example Zoom Pavilion – suggest sinister forms of control: non-stop surveillance, facial recognition technology, drones, heat-seeking threats and menaces, remote body scans and all the other oppressive technologies the techie geeks have come up with.  In fact, this phone I carry around with me everywhere is a tracking device!  But if I don’t have it…. how am I going to know where the nearest Starbucks is?  I guess its a trade off. 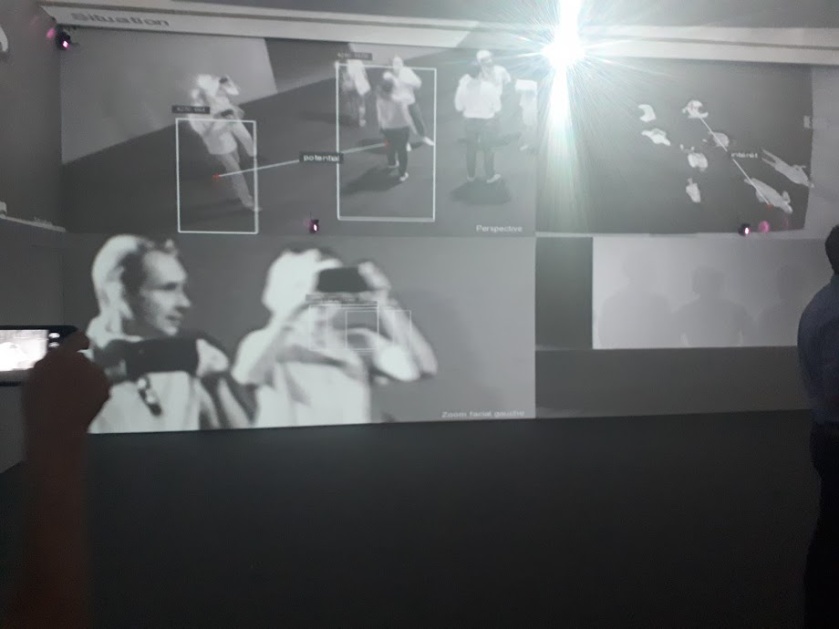 Walking into the Zoom Pavilion installation is highly unsettling.  Multiple camera immediately focus on the viewer’s face, enlarge the image, then analyze, compare and store it.  There is a strangely disturbing soundtrack of zip lines, clicks, whirs and hums.  The walls are covered with real-time images of the audience, as they tentatively observe. The museum goer becomes a passive participant in a ghostly, black and white world.  A sense of being tracked or hunted is pervasive and the worst kind of corporate/government malfeasance is evoked.

In fact many of the works by Rafael Lozano-Hemmer create a sense of stepping into a reality much bigger than ours.  We can participate but only minimally.   A sinister power that lies elsewhere is amplified and our actions and interactions become trivial.

Video of works by Rafael Lozano-Hemmer in “Unstable Presence”

And there was more.  The Museum showed art works by some of my favourite artists … so it was a great day in sultry Montreal. 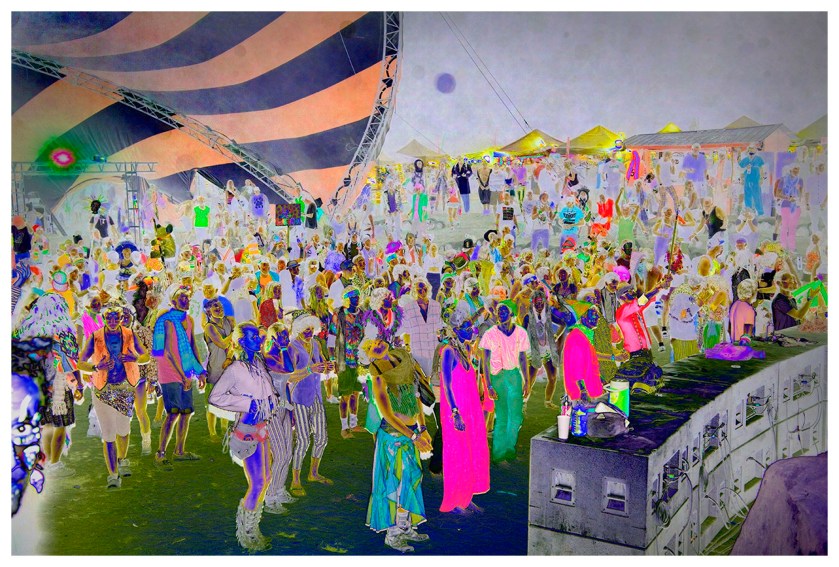