I walked north from Dupont on Osler and then veered left to take in some of the desolate, windswept beauty of the Junction. All was bathed in a high contrast glare on this bright afternoon in deep January.

It was such a relief to be in the warm, friendly gallery space, filled with laconic poetry, as a succession of trains rumbled by outside.  The show at Jessica Bradley is called Signs & Symbols.

Work by a dozen artists is on display. The delivery methods are diverse but there is a definite coherence to the show: high Concept Art, detached and cool.

The show got me thinking about the material manifestation of ideas and how far ranging that could be among the original Conceptual Artists: From the notion that “if it’s worth doing it’s worth overdoing,” (for example, Robert Smithson literally creating a new landscape) to instances whereby the object part of the art became less and less important until finally, poof!, it was gone (as in Sol LeWitt handing out some instructions).

In this exhibition, one end of the spectrum (the “less is more” end) might be occupied by Jason McLean who jots some practically illegible notes on nice thick paper and then frames them. It’s so deft and effortless, the way these particular text fragments powerfully capture some of the chaos and unmanageability of contemporary life. 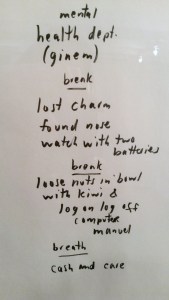 (Since it is a bit hard to read I’ve excerpted a particularly appealing section below:)

Jason McLean’s poetry/sign works really well with a photograph by Geoffrey James which is hung next to it. The photograph documents a bit of signage on the exterior of The Matador. The bizarre concoction of letters on dense green paint is like a faint missive from another world, emphasizing the divide between the dull staid society where mail is delivered and the after hours parallel universe where vice and mayhem rule.

The entrance to the Matador by Geoffrey James

Some of the work seems to be getting at the ineffable. Like a thick black, manufactured oval with glowing white letters by Kelly Mark.  It effectively reminds the viewer that life is short and eternity awaits.

Nothing is Larger than Everything by Kelly Mark

Yes, yes….there is no time like now! I should buy a Hyundai and some cheap gas!

What You Don’t See Displayed by Robert Fones

Tricia Middleton’s piece, painted in watery blues, is a quote from Nietzche.  It has a plaintive tone and makes a link between the courage to live life deeply and the by-product of that, which is intense suffering.

The most spiritual human beings (Nietzshe) by Tricia Middleton

The artist Karl Holmqvist creates an ambitious installation work.  Typewritten sheets completely cover one wall and climb over a platform.  The texts share a visual similarity to the “typings” of Christopher Knowles but unlike that famous autistic artist whose pieces never waver from a single idea, this installation offers a roving commentary on such disparate topics as celebrity culture, advertising, politics, history, religion and so on.  It’s not clear if these are found texts or compositions by the author.  There are a couple of sets of headphone included as part of the installation where one can listen to what sounds like a computer with a deep, male, German accented voice reciting random words. 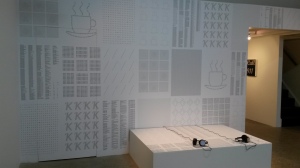 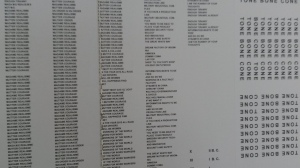 Walking back down Miller Street I had a new appreciation of the workaday announcements plastered on plateglass all around me.  What were the considerations that resulted in the final form? 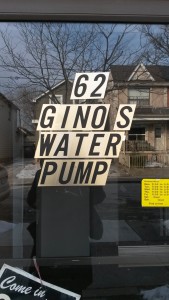